Ian Douglas Howard
Ian is an innovator and serial social entrepreneur who focuses his time helping NGOs and companies to find sustainable solutions to address social, environmental and economic problems. He recently completed an International MBA at Schulich in Toronto, Canada. Ian is an expert in open source, economic development, sustainability and clean technologies.

We spent the day driving to Charlottetown today. It was thanks to the GPS, a Garmin, that we changed course. After a few presses of the screen we realized that Charlottetown was only 4 hours away, a mere jaunt for someone from Northern Ontario. So there we were on the road. I noticed, however, that this GPS was silent.

I had turned off the voice prompts on my GPS about 2 days after I bought it. So did my sister, whose car I was in on my way to Charlottetown. She said that she found it rude. Funny, I found the same. So did her husband. To me, the imperative tone of the GPS man or lady drove me nuts. So bossy. Than it occurred me, you can choose an Australian, English, or American, but there is no choice for Canadian. The American voice, the American standard English, not too dissimilar to my own accent, tells you to "turn right in 200 meters". How rude indeed. I believe a Canadian, from Charlottetown to Toronto and possibly out to Victoria would say, "Please turn right in 200 metres", and would sure as heck, he or she would inflect that last syllable.
Posted by Ian Douglas Howard at 2:36 PM No comments: 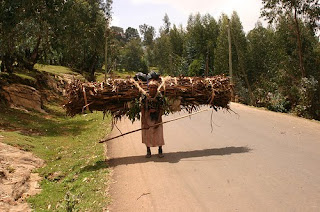 This post may smear my environmental credentials some, but it is indicative of how hard it is to be green.
By in large I am impressed by what has become a leading garbage program in Toronto, where I live. Although this program is still primitive it is better than most big city waste programs. Toronto has city-wide composting for homes (non-multi unit dwellings) and recycling. The city also limits garbage per household, through a tax surcharge based on the size of garbage bin that you choose to use. Though a commendable program, it is somewhat besmirched by the fact that what compelled this city to set-up these programs was that the city ran out of landfill space. We now truck our garbage to Michigan (~600Km) and soon only half that distance to St. Thomas, Ontario (~200Km). Over 100 trucks a day leave Toronto filled with waste being hauled in 50x8x10 foot trailers (figures are approximate) to make this long journey. Any attempt to find a better alternative has been hacked down by particular interest groups so to leave us with the worst choice. I digress...
We have been renovating our home. We took out a wall to create a big and open living room in the front of our house. The original wall, made nearly 100 years ago was built with a solid wood frame and lathe strips across the frame. This lathe was covered in an inch of plaster. Later, perhaps in the 60s wire mesh was put over top of this and another 1/2 inch of plaster applied. Than in the 80s drywall was added. This 13 foot wall was nearly a foot thick. We hauled out 2 tonnes (apx) of plaster, drywall and bits of wire mesh. With little thought I separated the wood from that material, thinking that it has to be disposed of separately.
I was left with a pick-up truck full of lathe wood. I searched for something to do with it. I wanted to make it into wood pellets, or chips. I could not find a service that would do this in Toronto. I started to look for a chipper, but every piece of lathe had 3-4 nails and it would take an inordinate amount of time to remove, if I could find a chipper at all. No one was interested in the wood. In desperation I finally called the city. I was escalated to a manager who informed me that it was no problem at all. He directed me to the Ingram transfer station. I drove up. At the inspection and weigh scale the attendent marked "Wood Waste" on my sheet. All looked good. I presumed that I was on my way to a special wood area to drop off my waste. I was guided along then entered a large building where I was waved to a large pile of random garbage. I yelled to the guide to indicate that I had wood. We exchanged yells (it was loud in there) and he finally asserted "this is where the wood goes, there is no other place for it!" I was agast. In my wood went, to a big pile along side of all sorts of radom waste. An old couch. A kitchen cabinet. Stuffed animals and other bags oozing in a mountain of garbage. I suppose that my waste will decompose eventually, though wood is such a precious fuel. I thought back to Ethiopia where I saw women and children carry loads of wood for tens of kilometres to sell in the market. There it is an essential fuel and here I just tossed a tonne of it for it to be shipped across the Province to be burried in Michigan. What a terrible waste. (see photo right that I took just North of Addis Ababa in Ethiopia, June 2007)
What surprised me most was not that the city did not divert all wood, but that seemingly this is not a frequent question and that all of the renovations to old homes that are done. I was shocked that the standard practice for disposing of this old lathe and other quality wood is simply to discard it into big bins. There is a tremendous amount of value in that wood and it could easily be made into pellets for fuel, chips for gardens, or even used to heat the ovens used to accelerate the composting of our green bin material. We have a long way to go and although consumer waste is where we focus our attention, construction waste should certainly be considered. Because we have not built an infrastructure to reuse this wood it is simply added to the main stream of garbage. It likely costs more to do this and certainly causes more environmental damage, but it is simply one of those things that we have not been impelled to address. I paid $15 to dispose of it this way. A higher fee would likely be one way to interest entrepreneurs to take that wood and convert it to something useful. But alas I too am now complicit in this dirty business. Sorry.
Posted by Ian Douglas Howard at 7:32 AM No comments:

I decided to create this blog to separate my non cleantech work from other blog entries like my wood waste one. This blog will be more random and will serve for me to write generally, whereas blog.vectorbravo.com will serve to develop my thoughts on cleantech.
Ian
Posted by Ian Douglas Howard at 7:00 AM No comments: